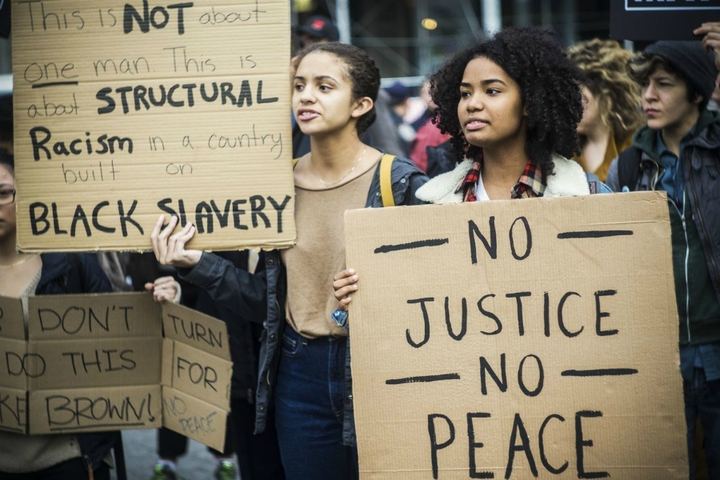 I remember protesting with my mum against apartheid in Edinburgh in the 1980s and how important it was to me, as a ten-year-old, that there was a way I could help. That there was a way to call on the world to change. Inspired by recent political and social movements led by young people throughout the world, I want to write about how activism and political engagement can shape and change a young person and those around them. Looking at the here and now in the stories of three young people- deciding and attending their first protest- but also weaving in the voices of activists and their stories from our recent past, I hope to write a play about the power of standing up for your beliefs and in the hope of the protest. I am delighted to be supported by the wonderful team at Imaginate in realising my play.

We are delighted that Hannah Lavery, an award winning poet, playwright and performer, is the new Imaginate's Accelerator artist. Hannah will work on a new piece of writing for age 10+ called The Protest.  In 2021, she will share this script as a work in progress alongside projects by Xana Marwick and Shotput.

I’m done wi waiting fae them to change. Don’t you see? This is oor fight. This is oor time.

Aye, we cannae rely on them - not anymore.

What led them to take a stand?

Will it be all it promised to be?

Can they be a force for change?

The Protest by Hannah Lavery will explore the experiences - the moments, the encounters and the individual and collective journey to The Protest and to activism of three young people.

What was the spark?

What obstacles do they face?

Who is with them?

Who is against them?

Will their idealism survive?

In the face of so much turmoil and threat young people have found places to protest online, in their communities and on the streets. The Protest will look at our three characters and their journey toward activism. Their journeys will interweave with interviews from a cross generational group of real activists - who have protested and protest still and from those who did and now don’t.