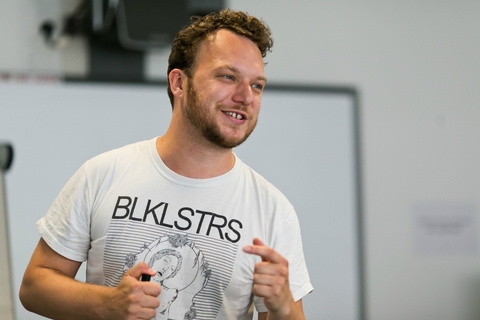 I’ve been wanting to write this play for ages. Imaginate’s Accelerator offers me the opportunity to spend time on research and development, stretch myself and experiment.

Oliver Emanuel was selected for Accelerator in June 2019 and offered funding to research and develop a new piece of writing for young audiences: I Am Tiger.

A week after the death by suicide of her big brother, Laura’s parents buy her a pet tiger. They never explain the tiger and never discuss Laura’s big brother. Not ever. It’s like Laura’s big brother didn’t exist. And having a pet tiger is illegal for a reason. Soon things start to spiral out of control… as things tend to do with overwhelming feelings of grief… and tigers.

This play is inspired by two facts: that there are now more tigers living as pets in the west than in the wild; and that the biggest killer of men under 50 in the UK is suicide.

"I want to write a one-person play for 10yrs+ from the point of view of a girl – and her tiger – to explore ideas about mental health and why it is so difficult to talk about. And how crazy it is to keep wild animals as pets.

Working with psychologists, mental health experts as well as zoologists and specialists in animal behaviour, my aim isn’t to make a piece of theatre that is preachy or issue-lead but a genuine, inspiring work of art that can be toured to schools as well as theatres.

I also really want to meet a tiger."

Watch Tiger is Out, an extract from I Am Tiger, directed by Lu Kemp and starring Ava Hickey, which was broadcast on BBC as part of National Theatre of Scotland's Scenes for Survival.