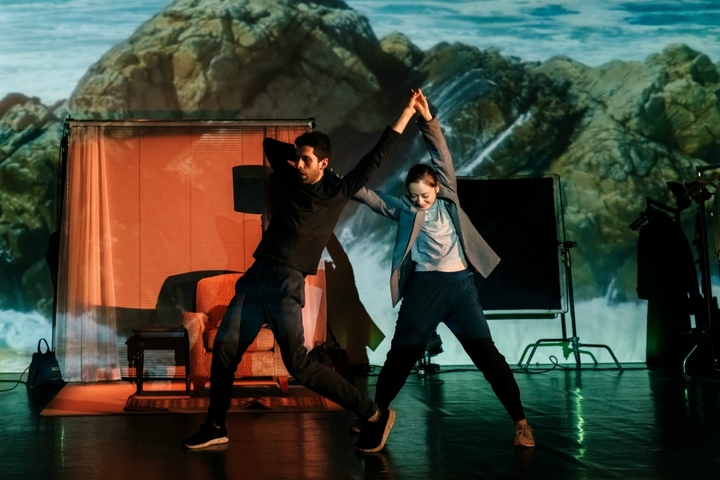 I'm excited to be delving into this process with the help of Imaginate, because I know they will encourage us not to hold back and to make work that resonates with young people in our world today.

Shotput (Jim Manganello and Lucy Ireland) have worked on a new dance theatre performance for teenagers called Untitled Discotheque Project. Since they started with Imaginate in 2019, they have been funded to do some initial research and development with their creative team, and a series of workshops with teens at Musselburgh Grammar School with Jacqui Crawford, a member of our Teachers' Theatre Club.

After a delay due to Covid-19, we have rescheduled the planned work-in-progress for the Children's Festival in May 2021, while Jim and Lucy came up with a new plan for their May 2019 development time - you can read about how they have used this time in their blog. In the meantime, they are currently working on The Slow Dance - a podcast associated with the live show - in which teens talk to other teens about sex. These conversations will feed into the process of making the physical show, once such rehearsing is possible again. The Slow Dance is supported by Creative Scotland and is being made in partnership with Platform, Beacon Arts Centre, Aberdeen Performing Arts, and other organisations and schools around Scotland. If you or a young person you know might be interested in getting involved, you can find more details here.

An audience of teenagers enters a discotheque. Pop songs blasting. Bodies moving. Phones flashing. Hormones raging. Then the slow song comes on. There's that suspension. That tension. And our show begins.

The as-yet untitled Discotheque Project is about the intersection between teenagers, technology and sex. Performed by 5-6 dancers and a DJ, this show is devised from how teens feel about sex in the age of Snapchat and Instagram. This high-energy experience begins and ends as a disco but transitions into a show that is characterful, heart-breaking and fun.

The Discotheque Project is not a cautionary tale. It's not a documentary. Nor is it an education. This is a show about feelings not morals.

Shotput makes work about the darker corners of contemporary experience with athleticism, humour and a healthy sense of the absurd. Here are some early stimuli for the Discotheque Project:

1. Communication: Most sexting today happens between teenagers on Snapchat.

3. Health: Teenage pregnancy in the UK has dropped dramatically. However, it seems that this drop is because teens are spending more time on their phones.

Ours is a culture pulled in many different ways. This show seeks to give voice to that culture, the good, the bad and the twisted. And we hope that by participating in this fun, shared, live event, our teenage audience will open up and continue the conversation in the world outside.

"Discotheque Project offers us at Shotput the opportunity to think on a different scale than we have previously. I look forward to being challenged by new collaborators, like our DJ. I hope we can break some taboos with humour and life."  Jim Manganello