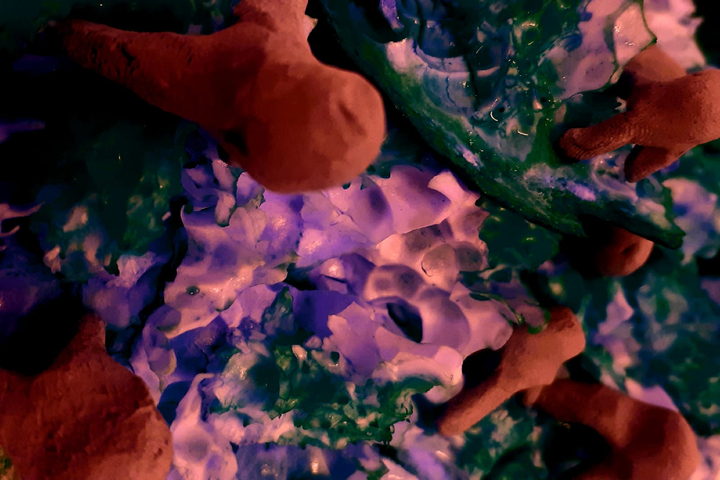 Ruby is an artist based in Glasgow who makes participatory performances, installations and happenings, with surrealist and philosophical undertones. She enjoys making art with other people and thinking about new ways that people can make art together. As a Launchpad artist, Ruby will be developing a participatory show that situates the audience inside a human body. She will be working on giant organ ‘puppets’ that encourage the audience to move together to get the body working. She is researching collectively operated puppets, such as those from the Japanese Bunraku tradition, as inspiration for building interactive heart, lung and intestine puppets that encourage the synchronized motion of participants.

She will be devising a script that sees actors play a Brain Committee plagued by corruption and fierce competition between different organs in the body. The audience are cast as the ‘workers’ who drive the bodily functions. They will need to reorganise and cooperate to recover the body from its sickness.

Ruby hopes that this show can be part of the discussions and action that takes place around the COP26 Climate Conference coming to Glasgow this November. She thinks it is important for children to be centrally involved in discussions about the future of their planet and hopes that theatre situating a young audience as active participants can be part of that dialogue. She wants to use the body as a metaphor for the Earth and to explore how that metaphor can shine a light on some of the contradictions of our systems. She is inspired by the school student strikers who have heroically led the way in the fight against climate destruction and hopes to speak to and learn from some of these young leaders in Glasgow to help inform the direction and message of the show.

As part of Ruby's Launchpad programme she will be developing her Brain Committee idea alongside a range of professional development opportunities, seeing performances for young audiences including attending an international festival, meeting with other artists and the Imaginate team, and mentoring from Bijli Productions.