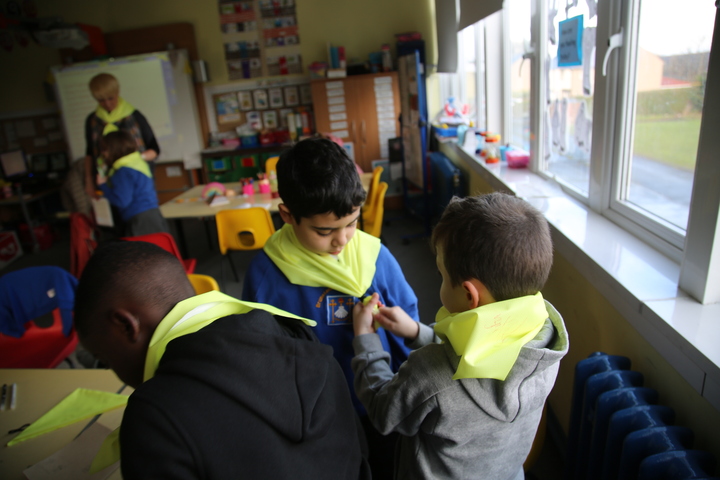 I couldn’t help but be inspired by things that felt magical when I was at school. Mainly outdoor education, art, music, and doing my own thing… I am now influenced by what I loved as a child - being part of a band and playing music together.

My outdoor education teacher, Mr Laidlaw, took us round cliff edges and sledging in deep snow on bin bags he had in his pocket. He made things feel spontaneous, dangerous and exciting, but now as an adult I think they were actually planned, and creating drama!

Ger and I are loving working with P4 at Brunstane Primary School. With Project Wild Thing we are going on outdoor immersive adventures.

On our first day the sun was shining through the window in their classroom. We played exciting music as they drew with shafts of sunlight beaming on their creations – we listened to ‘’Dan Deacon - Become a Mountain’’. He sings about being present, waking up, getting out there and breathing it all in. To Ger and I, it is a hopeful, positive, exciting tune that fits well with being outside and embodies our feeling of getting creative outside with these amazing young people. The class found so much more in the tune than we had - they heard sadness, and drew lots of interesting patterns which mimicked the music beautifully. You can have a listen as you read!

Their great teacher was delighted and said that one of the kids who never draws had a full page of wondrous squiggles while listening to the music. One of the class said that when the music started his imagination went wild and when it stopped so did his imagination.

Later we went into the wildest area of their playground where the class are not usually allowed. We ducked under branches and there were a few trips and falls with the uneven ground – the wildness became a little strong and unwieldy and we realised that next week we needed to have adventure training to be ready to go on a bigger adventure together.

At the end of the session, one of the children asked, ‘’what is it like to be an artist?’’.

Keen to answer last week’s question about what it is like to be an artist, we started the day with a slide show of the things Ger and I get up to – designing sets, making films, making books, we have a band and now going on adventures with them! And then we started our adventure training...

Amy suggested our team name should be ‘Team Together’, and everyone agreed. We created a KAKAW sound as a call to each other to re-group, as well as some rules about working together as a team, looking out for one and other, and leaving no one out. We gave everyone their own adventure sketchbook and then went to look for clues outside. Ger taught us ‘This is amazing’ - a game where you find seemingly ordinary things in the playground and tell us why they are amazing. An old bit of chewing gum was actually a button to a porthole to an underground ant kingdom! We continued to look for clues. Team Together loved finding bugs as they looked like ‘’little flat grey caterpillars’’ under the rocks.

Once we got back into the classroom, I read them an adventure story - ''The Secret of Black Rock'' by Joe Todd-Stanton while they had their milk and Ger played some classical music on her iPod which made it feel exciting.

Next week we head TO THE BEACH!!