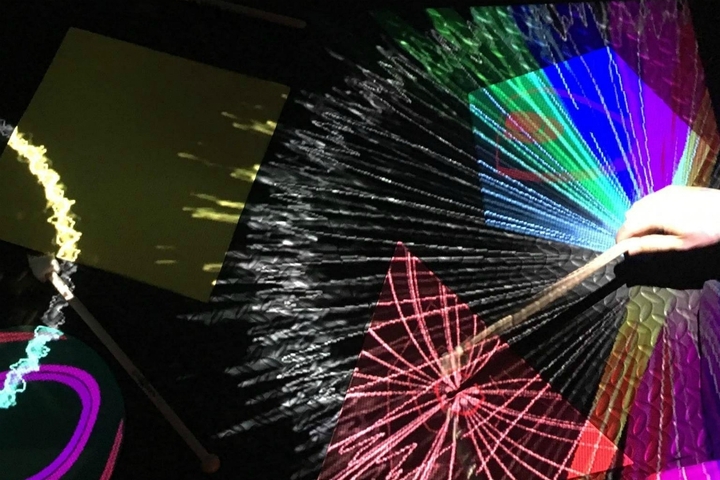 I did my first ever Pecha Kucha presentation as part of the Creative Renfrewshire night on 26th March!  It was set up by Alan Clark of Create Renfrewshire who is a real bright spark.  It was great to meet other creative folk working in Renfrewshire too. Pecha kucha is actually a lot less scary than other public speaking as it feels like quite a conversational format.  I liked not holding notes and just explaining things in my own words.

I was really inspired by this space, created by visual artist Ewan Sinclair and Sound Designer Bal Cooke.  It’s an interactive music installation.  It came about from their desire to create a mobile sensory room.  I saw it during its open day at the Kinning Park Complex in Glasgow.  I loved how inclusive it was and how anyone can step into it and interact with it regardless of their ability. I loved the visuals and the way the colours spread across the floor and walls as you hit an instrument.  There were all sorts of great ideas like ribbons hanging from the ceiling that made sound as you moved them.  And these things you shout into that splashes colour across the wall.

I have been along to a couple of the reminiscence sessions at the Heritage Centre at Paisley Museum.  They are a chatty bunch of people in their 70s and  80s.  They have great stories.  The woman who runs the sessions, Pauline McDougall has been so lovely and based the last session about food in order to help me with my research.  There is a rich history of food production in Paisley like Brown and Polson who made corn flour and custard flour.  One of the participants told me about all the many different flavours of custard they used to produce; strawberry, raspberry, orange, chocolate, caramel!

Pauline had sourced various Browns & Polson recipe books from the museum.  It was fascinating to talk about rationing during the war and how this generation had the best dental health records in history and how it was the first time in history that the bridge between the calorie intake between the classes was greatly reduced.  And everyone grew their own veg.

One woman who grew up in the 50s/early 60s talked about the culture of getting sweets once a week but now kids get sweets every day.

Again, lots of food for thought.

Finally, I went to Imaginate’s Ideas Exchange a few weeks ago.  I feel like I’ve been a bit out of the loop with things like this since Jack came along so it meant so much for me to just go and take part.

There were four new works in progress, and they were all excellent!  Really they seemed to me all fully formed ideas already, that just need time and space to make the full thing.  Tortoise in a Nutshell did a brilliant and bonkers piece with three sections that kind of interrupt each other, really inventive stuff.  There was a couple of guys doing brilliant juggling and they had such an old fashioned charm about them, it reminded me of the French comedian Jaques Tati.