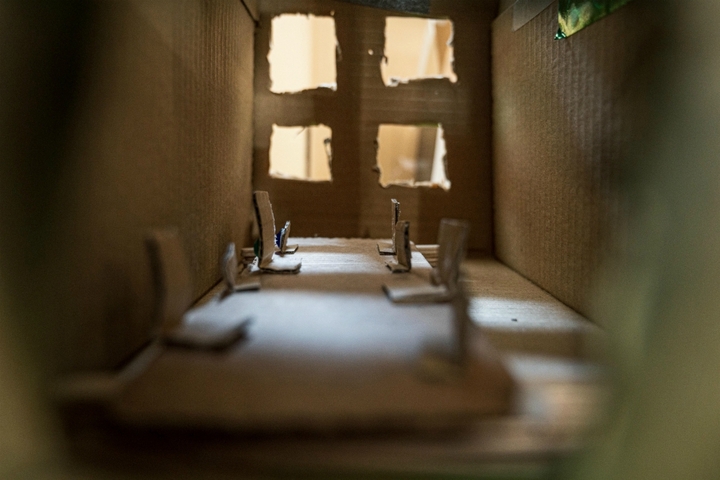 This week’s plan was to move into some model making after the previous week’s map drawings. To give some more inspiration we shared a slideshow of innovative architecture and sustainable homes from around the world, and images from a recent trip to Amsterdam where I saw a Lego model of the city. We had a fascinating discussion around how the area of Restalrig will change in the future, with thoughtful ideas about how we might live in the future. What our homes and cites, travel and lifestyles might look like: less pollution, flying cars, floating homes, underground houses, and buildings made from natural materials and environmental changes.

Using cardboard boxes and a wide range of interesting textures and materials we began thinking about scale, detail, surface, function, and with imagination and lots of excitement there was a sudden flurry of creativity amongst each class to begin work on these models.

In our physical activity sessions, we continued to explore expressive ways to imagine travelling in creative ways, as well as revisiting the work around balance, trust, push/pull, leaning. Our classes were shorter as it was Ash Wednesday and we accompanied the classes to Mass at the local chapel. We really felt a part of the daily life of the school today!

In the afternoon session some of the class expressed an interest in photography and began documenting some of the activities using my digital camera, and captured some interesting compositions and portraits.

We began discussing the end sharing for the residency, which is starting to seem like it is getting close, and what we would like share from all the work we have been making, and the children came up with a fantastic title for the event:

Future in the Kids hands.

This week was a consolidating week, to revisit and work more deeply into the future city models and a realisation that this model making project had really captured the imagination of the children in both classes, and needed time to develop the children’s learning by more making and building, seeing the children’s imaginations, confidence and abilities really taking shape.

The afternoon class again explored taking more photographs and I brought in some old film cameras as an introduction to photography, with the aim to do some short photo activities if time allows in the later sessions. It is interesting to be able to be responsive to what is alive for each class as the residency evolves, but also knowing that time is short and this could be the subject of a much longer project.

For the creative movement work we also had a sense of consolidation, revising the recent skill sharing and more energetic creative group exercises travelling across the gym. To refine the past weeks’ explorations, we proposed to work in smaller more specific duets and trios, to create a short piece inspired by the ideas we had worked on so far, and this resulted in lots of very individual approaches and good teamwork from everyone, and we shared an intention to make short films of these pieces next week.

In the gym we built a small dance and film studio using the gym equipment, with long rolls of paper and lighting, and filmed all the duets, trios and quartets of the movement material the children had created over the past few weeks, fitting them all into the small film studio, which resulted in a series of uniquely different and dynamic short pieces. We are planning to share these films as small projections within the future city model installation with some mini video projectors owned by Anna.

There was a focus and clarity around making decisions about the choreography and lots of support from everyone watching. Each class we also had some volunteers to took be film assistants who called out at the start of each film: “Lights, Camera, Action!”

For the rest of the sessions we returned to the model making, with many fantastic architectural ideas emerging: hi-tech living spaces, detailed interior decoration, complex shaped high tower blocks, and city layouts for flying cars, the task has really grown over the last three weeks into an organic mix of individual ideas and supportive teamwork.

We began to talk with each class about how we can bring together all of the models and share all the wealth of material that has been created, and we felt a real sense of purpose from everyone wanting to keep making their models and adding more detail, colour and texture.

After the end of each session Anna and I started looking forwards to planning the final sessions and how we could fit in another creative task that I have been planning since the Calton Hill trip.  This is to tell the story of the Edinburgh Fire Balloon and Dr. James Tylter, who in 1784, landed the first hot air balloon in Edinburgh in the village of Restalrig. This will serve as a way of linking together several of the themes of mapping, history, imagination explored over the past few weeks.

In the days after this session, Coronavirus shutdowns began and the school went into lockdown, and we were unable to realise our plans to assemble a future city model and film screenings, exhibition of all the maps and drawings in the gym hall. Anna and I are sad not be able to share all the wonderful work and ideas from the children over the past few weeks, it has been a thoroughly enjoyable project, and a huge thank you to the staff and children at St Ninian’s R.C. Primary for all the hard work and creativity.