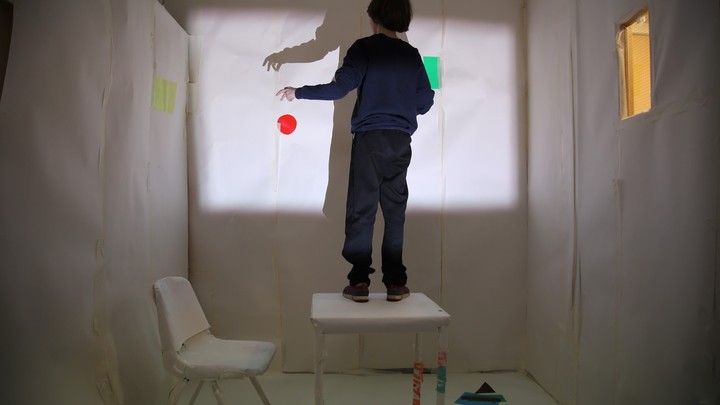 “Creativity needs trust to flourish.
Learn each other’s worlds.
Build the art in a way that demonstrates you know their world”
Anne Basting

The final experiment of the FRAMES residency was to make a film in collaboration with film maker Geraldine Heaney, and the pupils of St Crispin’s School. We wanted to make something which took the pupils seriously as makers of art. Our central reference for this was the Democratic Set by Back to Back, which I spoke about in the first blog.

The film is titled FRAME. It centres around the same shot in a white space, like a blank canvas or white cube art gallery (as much as is possible in a small play room using some paper and sticky tape!)

‘Whoever enters this space is an artist

Whatever they do in it is art’

Geraldine and I curated the materials (based on things we had seen the pupils be interested in) and were available to collaborate with them if and when they wanted to. We were trying to capture autonomous moments of creative expression; seeking out a series of ‘living images’ worthy of being framed in a gallery. This was ambitious, and hard, the ethics of it nearly exploded Geraldine and my brains several times! There were moments where it felt voyeuristic and uncomfortable, moments of total joy and creativity, consistent moments of surprise and lots of laughing along the way. As the film’s director, I had to balance giving a strong visual offer with no attachment to how it was interpreted.

Consent was a really interesting discussion point throughout. I was really clear that as the director and film maker we were doing a lot of framing (hence the title). It also felt really clear to us the moments that the pupils were consenting to collaborate with us, although this would never be through words. Both Geraldine and I feel like this was a genuine three-way collaboration. We also both feel like we just scratched the surface of what these artists are capable of.

We filmed over four days, you can take a look at what we created here:

We invited parents and carers to come to the showing of the film, in the school, with an accompanying exhibition of photos form the process. My favourite comment was from a parent of one of the pupils, Jetty (who does the shadow sequence in the film). They said: “What I loved is that each of the person in the film were really seen. You got to see what is beautiful about them.”

I owe huge thanks to the Imaginate team, especially Fiona, and to Geraldine for her integrity, creativity and generosity. I would also like to thank Sue Giles and Naomi O Kelly for their support and encouragement. And of course the amazing staff and pupils of St Crispin’s for their trust, openness and creativity.

I will look back on FRAMES with so much affection and pride. Its confirmed to me why I love this work – its liveness, immediacy, challenge and spontaneity. Where you see humanity in all its glory, be it messy, shocking, hilarious, joyful and moving.

Makes me think of a final quote from Anne Basting, (who seems to always say it best!):

“Go where you’re afraid to – make beauty there”

All photos by Geraldine Heaney.