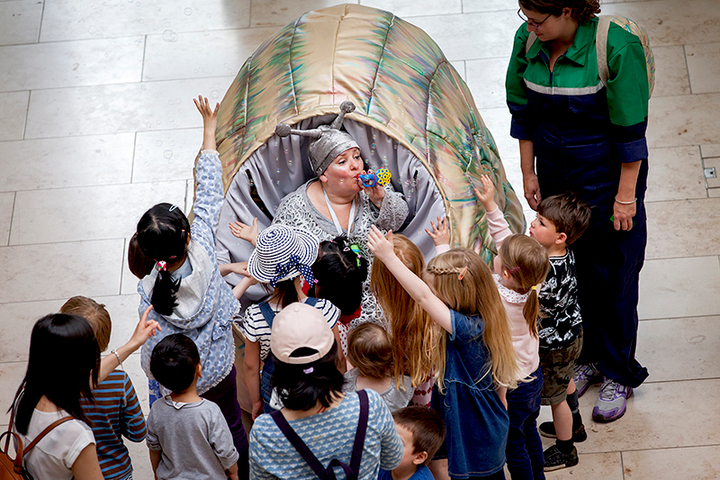 Weren’t you expecting me – where did it come from?

Since 2008 I have been working annually with Skanes Dance Theatre in Malmo, Sweden. Each year when I’ve visited their Programmer, Liselotte, has talked about how difficult it is to find good quality dance work for young audiences and how it’s virtually impossible to find work that includes any form of body diversity. She regularly encouraged me to make a piece for young audiences. I wasn’t sure. I’d never made work for children before and I hadn’t even seen that much work aimed at young audiences.

Something in all of Liselotte’s regular questioning must have sparked my creative thinking because sometime in 2013 I developed an idea that I wanted to transform myself into a giant snail in the name of art!

I realised that as a wheelchair user, I don’t have a foot fall and neither do snails as they slide and glide everywhere. Having moved from the other side of the world in 2002 and having done quite a lots of touring, with girl Jonah, The FATHoM Project and Scottish Dance Theatre, I realised that my trusty red backpack had become a somewhat portable home carrying my worldly possessions on the back of my chair. I’m also at the perfect height to engage and interact with children, and pretty much do on a daily basis as they are often curious and have many questions about my size and my chair. I thought these two things could be the perfect basis to start to make a work from.

In October 2015 I finally met up with Fiona Ferguson, from Imaginate, having been introduced, via email, 18 months earlier. I talked to Fiona about my snail idea. She was very supportive and suggested that I go and see as much work aimed at young audiences as I could.

Over the next 18 months Laura and I saw lots of work at SWOP Festival in Denmark and at Edinburgh International Children's Festival and I realised two main things:

-         Most bodies, in work being programmed by the major children’s festivals, are primarily performed by standing up/non-visably disabled, white people.

There are of course exceptions to both of these statements but the majority of work I was exposed to was exactly that.

Making these realisations I started to question ‘Why weren’t disabled artists making work for young audience?’ I took this question to Fiona Ferguson in Jan 2017 and the ‘Weren’t you expecting me?’ project grew out of this.

This is the first of a series of blogs written in connection to the project, the various events that were held and also some of my own reflections from my journey of making work for young audiences for the first time.