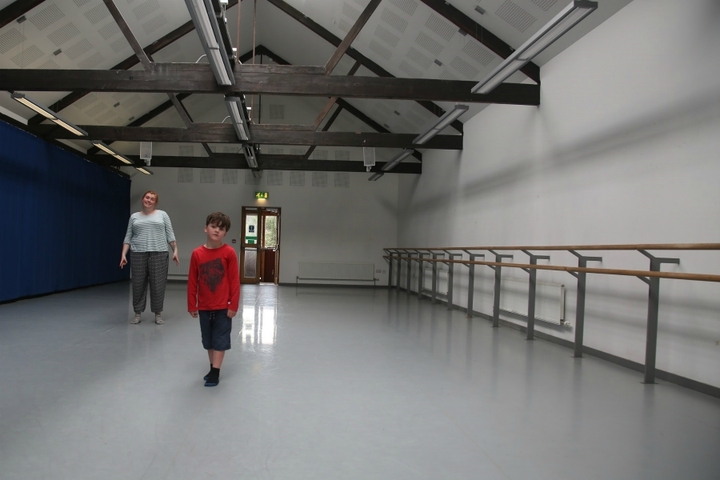 Women Dancing were one of two projects supported in 2019 through Imaginate at The Work Room.

We (Women Dancing AKA Lou Brodie and Geraldine Heaney) were so chuffed to be part of this programme of residencies. In the time leading up to the week we were to spend at The Work Room we met up a couple of times to try and give our self somewhere to start from when we arrive. We knew that we wanted to think about ‘Why we move’, ‘what makes us move’, ‘Who has permission to move and where does that come from’.  A few weeks before we did a call out to other members of The Work Room inviting people to have a chat with us about the things we wanted to think about. We had a great chat with Jim Manganello and that confirmed our feelings about trying to open up our discussions, to hear about other perspectives and listen to other people.  So the week of the residency we filled some of the days with other people to move and talk with.

We are so grateful and feel very lucky to have spent time with Adam Sloan, Neil Price, Amy Stevenson, Naomi Shoba, Freddie Hallthorpe, Clarissia Kruithof and Anna Hodgart. These people came in and shared some of their ways of moving and thoughts about moving. It was great to see where people’s ideas intersect and to move our bodies in lots of new ways.  We were exploring the possibility of creating some sort of ‘Live’ Women Dancing experience and had thought about spaces where across generations/differences people have permission and agency to dance/move. We spent a bit of time thinking about Carnival and Family Functions. Spaces where people can invest and participate in ways they choose. Sometimes there’s an element of spectacle, sometimes there’s just space to be part of something bigger than yourself.

Being given space and time to think and feel things meant it was hard to ignore the other things in our lives and the world that feel huge and often hard to think or talk about. The Climate Crisis had not been on any of our plans for things to explore in the week but we felt that while we were searching for spaces to allow for Collective Joy and permission to be that perhaps we also wanted to find spaces for Collective Grief and places to have difficult conversations across generations.  On Thursday afternoon we hosted an Open Studio which we had titled “A Carnival for the Imminent End of The World: A Family FUNction”.

We put together a running order using some of the things we’d explored over the week (music, text, routines, The Slosh, singing, sitting, watching, listening, permission) and invited friends of all ages to come and join us. On the Friday in true Women Dancing Style we took some choreography that Freddie had shown us and a song that he’d chosen and created a new video to mark the end of our week.

It was a pleasure to move everyday. It was an incredible luxury to have such a welcoming, beautiful and open space to work in. It was surprising to cover so much ground and so many different ideas. There’s still a lot of thinking and reflecting to be done from this week but We are SO so so so glad to have had the chance to do this.