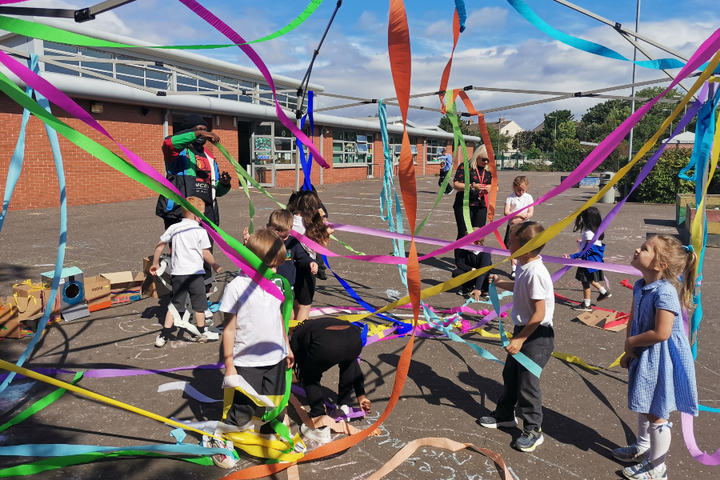 When Imaginate asked me to run a Summer Immerse week for P1s at Craigroyston Primary school, I was in the midst of a difficult house move, with my whole life scattered across too many boxes. As the start date was fast approaching, I was now sitting in my new living room, surrounded by a maze of cardboard boxes that my cat was enjoying way more than I did. I was overwhelmed and found it hard to unpack physically and emotionally. I didn’t have to scratch my head for too long to realise that the theme of the residency was sitting right under my nose.

I was interested in the concept of moving things, hiding, storing, packing and unpacking, carrying baggage, the physical movements associated with them but also the emotional trail that goes with it. It’s not always easy to put words on feelings, to make the abstract and intangible, concrete and visible, especially for a young child (or even an adult as it turns out). The box would become the metaphor for that transition between the inside and the outside, what goes on inside our head and outside our body, the box a physical channel for these. I wanted to go big and to go small, zooming between scales to offer both an intimate and collective exploration for the pupils, give them the chance to express their private and their social self. I had the main material i needed: boxes, lots of boxes of various shapes, colours and textures that would constitute my starting point for this messy, fun and vibrant experiment.

I was joined by a very talented Hip Hop and Krump dancer, Lebe Sinanduku, “ Kemono L.Riot”, who “wears his emotions as a cloth, as he expressed his art on stage” who couldn’t have been a better match. We were both very interested in exploring how we could move while wearing the box, using the box as an extension of our body as well as becoming the box. His playful and dynamic approach to moving was the missing link between my box and the pupils.

We arrived on a sunny and warm Monday morning to be greeted by very enthusiastic P1s who just couldn’t wait to move around as they hadn’t have the chance to do any P.E during the pandemic. An area of the playground had been invaded by 30 cardboard boxes or so, in which Lebe and I were hiding as the P1s took place around them not knowing what to expect but already intrigued “ Is it a castle? Is there sweeties inside? Can we go and play with those?”. As we jumped out of the boxes to say hello, laughters and screams erupted as we started moving in and out of our comfort zones.

The boxes turned out to be great versatile tools for improvisational circle games, children were very excited to touch and play with them. When we asked them to guess what could be inside the boxes, they used chalks to draw on the playground their guesses: the sun, a puppy, toys…then we asked them to draw what they would hide as a secret into one of the boxes: themselves, a house, their family, love. They took great care and pride into illustrating what they were hiding inside. Then we delved further into emotions, accessing and expressing them. Literally, with blind sensory boxes filled with different textures (jelly, pom poms, foam, sticks etc), pupils were invited to dip their fingers into the unknown and describe with their words how it felt “soft, yucky, weird, warm”, the sensory stimulation providing a direct link between the concrete and the abstract. We also looked at how we could wear those feelings on our bodies and Lebe took them through a robot choreography going from anger to joy, from sadness to surprise. They then mirrored these moves with their boxes. By the end of the process, each pupil were given their very own box and access to craft materials “to decorate their inside on the outside” and wear the box however they wanted. One boy made a hat out of his while another one created some sort of shorts, a girl turned hers into a basket and another into a backpack. They were all very clear about what part of themselves the box was representing and how different it was from all the others.

As our residency was coming to a close, we had two BIG events left for them. We had promised them a big party and it came in two shapes: first a Narnia inspired cardboard wardrobe filled with multi-sensory elements and a paper streamer canopy for the last day. The large cardboard wardrobe first concealed under sheets as it appeared in the playground, left them to wonder whether it was a time machine, a space ship or indeed a wardrobe. It came with the special instructions of doing a before and after dance to express how they felt. In pair, pupils were cheered as they made their way through the first set of double doors, not knowing what to expect inside, except to just have fun! 30 seconds inside before they made their way out giggling and showing their best moves to the rest of the class saying : “ I saw a star! and me a unicorn! There was a balloon!”. The excitation was clearly palpable for the duration of the event, like some sort of rite of passage that grants you the power (and the confidence!) to make your imagination visible.“The Magic Box” (as they nicknamed it) made way for the party on the outside on the last day. As they gathered around a stripped gazebo structure, wearing their unique box, children were given a roll of coloured paper streamer to throw over in an explosion of colours. A countdown, the beats of the music getting faster, the anticipation of their body language, all came to a unison as they threw their paper streamer into the air and watched them fall over them and the structure. The party box had been created! We all gathered in the various strips of coloured paper, dancing our way around each other, moving our box and creating outfits and wigs out of the fallen streamers, merging joyfully our insides outside. Eventually the party came to an end, and each pupil collected the leftover bits of the party to put in their individual box as a memento of our time together. “The Magic Box” was left behind too in order for them to continue unboxing how they felt and celebrate what made them, them.

It’s been such an empowering, freeing and inspiring week with the P1s, allowing myself to re-connect with my inner child after such a stressful grown-up period of my life. But most importantly to allow them to forget momentarily the outside “outside world”. I really enjoyed getting creative and messy with them, transforming boxes on the spot into whatever was going through their (and my) mind and simply being in a moment. Collaborating with Lebe was also a very good experience. I don’t consider myself a dancer (more of a chaotic mover) and watching him interact with the children and being able to communicate some of my concepts through dance was very rewarding. I can’t wait to get back into boxes (just not my own…)! 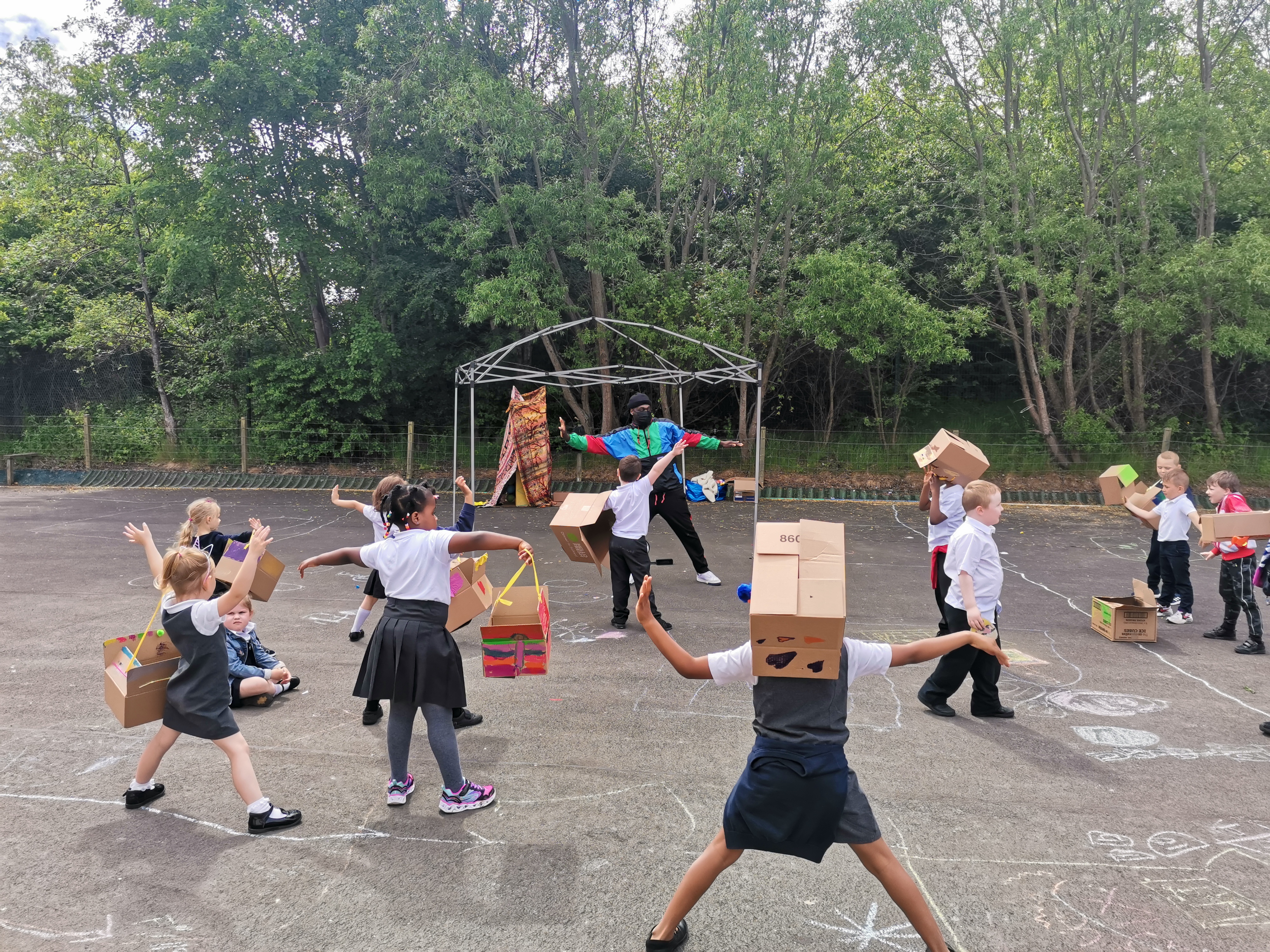