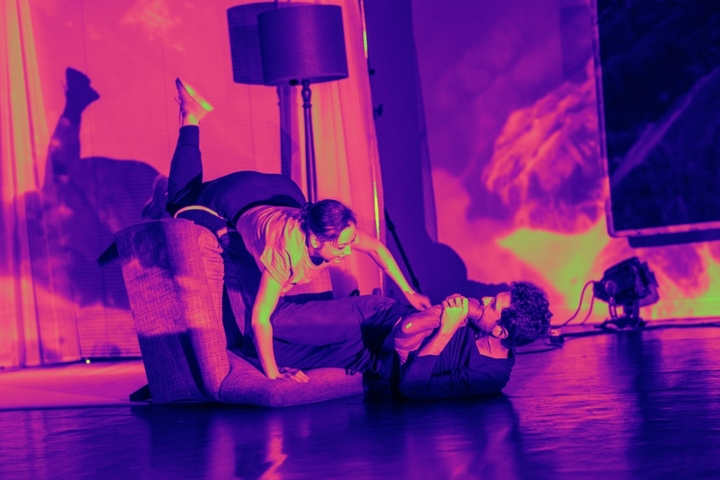 Jim Manganello and Lucy Ireland (Shotput) are Accelerator Artists 2019/21. Shotput are working on a new dance theatre piece for young people about the intersection between teenagers, technology and sex which they were due to present as a work-in-progress at the 2020 Children’s Festival. They talk about where they are at now...

It's been a strange journey for Untitled Discotheque Project, and we've not even had the full ensemble in a room. That was due to – no surprise here – Covid-19. At the end of May, we would have been conducting two weeks of R&D with the full team and sharing a work-in-progress at the Children's Festival. While we are so looking forward to sharing a space with each other again, the Plan-B process that we undertook tossed up some real rewards. For what they're worth, we thought we'd record them in this blog.

What did we do? First of all (and somewhat painfully for a dance-theatre company), we barred all movement. We just weren't comfortable asking people to be generative or even 'creative' at this moment. And we didn't want our first dances together to be through screens. Secondly, we asked each collaborator – designers, DJ, performers, ourselves – to do pick a topic related to the themes of the show (teenagers, technology, and sex), really obsess over it, and share with the group. The result was a joyous and whacky seminar, which saw screenings of films from the 30s, 70s, 90s, and 00s, readings of diaries and autobiographical records, mythology, and heated debates about Kanye West and Taylor Swift. A best title competition started to emerge:

Clearly, we lost the titling competition.

The conversations that resulted were really rich, often weird, and probably most importantly, not targeted. But over time, for us, there began to emerge a parallel, subterranean writing process. Creating work from scratch is always mysterious, but it's never magical. Usually, that 'non-magic' begins with simple physical prompts, through which we follow our impulses to give body to the show. In this case, staring at several static heads through Zoom, a 'script' started to rise from below. We make dance, so that script still remains to be realised by bodies in space, but in many ways, this process felt not so different to developing a screenplay, with certain characters making themselves known and writing their own stories.

That emerging 'story' (although we're not really in the business of narrative theatre) is really exciting to us – it's infecting our dreams, we want to know more.

We organised some of our thinking into lists – a kind of map for the future of our work on the piece. We'll share those lists here:

On the level of aesthetic, old-school disco might feature more (Studio 54) and contemporary teenage technology (TikTok) might feature less – at least on the surface.

On the level of technology, simple visual trickery might play a bigger role than we thought (think Wizard of Oz).

On the level of emotion, colour and external events, especially in lighting, will be a vehicle for feeling, rather than 'face-acting'.

When we think of the heart of the show, performativity and the joy in performativity feel richer than anxiety; i.e. when things are awkward they will be joyously awkward.

On a human level, the liveness of the show must be a starring character, especially now (post-Covid).

Things we Thought we Knew, but That we Now Don't Know

About the themes: we thought this was a show about teenagers, technology, and sex – we're questioning all three of those words.

'teenagers': is it about teenagers or for teenagers? How can we 'unpick' what it means to be a teen and dramatise/physicalise that experience?

'technology': post-Covid, we want to combat (not reflect) techno-isolation

'sex': we do not want to make something that is 'good for you' – is it more accurate to speak about lust, desire, fantasy?

On the level of character and costume, we thought we knew we would not play teenagers. We still don't want to play teenagers on a 'primary level', but the theme of performativity has opened some interesting, funny, and honest possibilities.

On the level of text, we thought this was a wordless piece, but because precise thinking and shifting focuses have emerged as interesting impetuses, there might be some things that text can just do better than movement.

So that's where we've gotten to. Working in this way – as opposed to physically – had a lot of cons, but a lot of pros too. It's definitely expanded the way we think about our practice, while at the same time making us even hungrier to share a space with each other, with an audience. It's made us realise how people being together, dancing, is not replaceable. It also made us realise the potential power of laying a foundation with the entire team. We would have done lots of this discussion among the two of us, and a good amount of it with the design team, but without a doubt, we would have felt guilty blocking out two weeks of talking time in rehearsals. And that, maybe, is the most radical upshot of this process. It really felt like a 'room' full of artists, digging into themselves, the world, their craft. We must carry that forward.