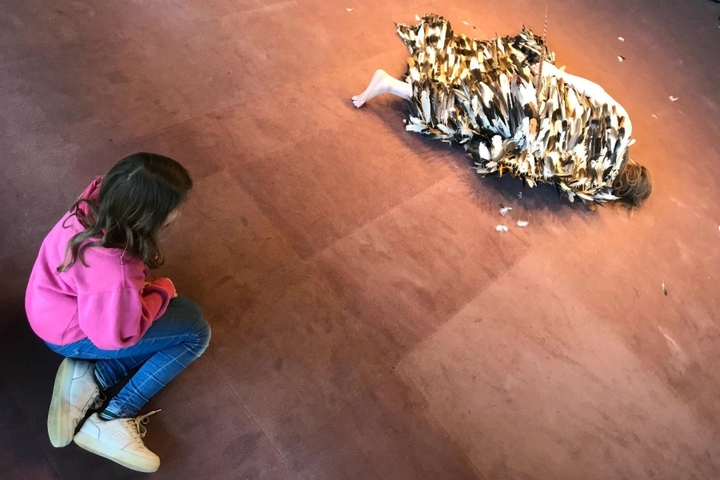 In the Home Lab Rebecca examined and developed a particular vision on the home-concept. In November 2019 she was invited by HET LAB - Hasselt (Belgium) to develop her ideas more in the frame of this residential workspace. Together with Tijen Lawson she developed the idea of a durational performance called ‘Birdwoman’. PUSH+ Norwegian partner Scenekunstbruket invited Rebecca to Oslo for a residency and a festival presentation of her performance. Enriched by new experiences and insights, Rebecca came back in February 2020 to HET LAB – Hasselt to finalize the first version of When I still was a bird’ Some weeks later she presented the performances in Krokusfestival (Belgium). In the following text she expresses her thoughts about the process.

“Krokusfestival (Feb 2020) was the first to provide a context to share the performance When I was a Bird / Still a Bird with an audience. What is called 'a premiere' in theater jargon did not feel to me as the end of a creative process and the start of a series of presentation moments. Rather, it marks a phase in a continuous artistic process of creation, sharing, continuing to work, sharing again.

I played six times during the festival. It was a different experience six times because of an ever-changing constellation of people that react differently. I cherish a special memory for the performance in which some children interfered so empathically with what happened that they strongly influenced, commented on, even directed the course of the performance and my performative presence. For the surrounding (adult) audience it was a unique one-off performance in a performance.

The experience during Het Krokusfestival confirmed that Still a Bird is not an explicit children's performance, but a performance for all ages, including children from the age of 5 years old. It derives its strength from the vulnerability of the collective witnessing and the different ways of dealing with the situation by an intergenerational and diverse audience.

Still a Bird places the responsibility for the experience on the audience and not on the performer. The performance is a mirror that invites you to look actively, not only outside but also within yourself.

I hope to be able to share this performance with even more people in the future. This story has not been finished yet.”