Blog 2: Shotput and the Slow Dance 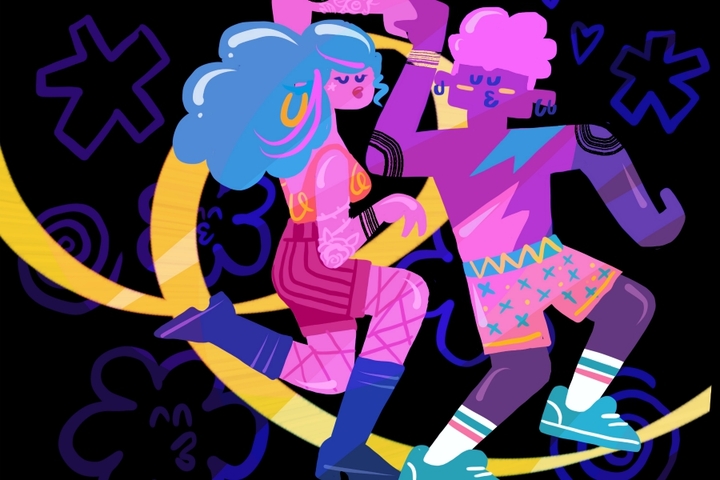 We've tried to embrace the slowing effects of lockdown on the making of our work. What are the rich territories that, pre-Covid, we may have driven through at top speed, the passenger shouting, 'Hey look!', while the driver can only see it in the rear-view mirror? Now, car broken down at the side of the road, we're trying to let the scenery really infect the art.

As we wrote in a previous blog, one of these territories is the ensemble. Because the show we're making is for teenagers, another territory is the teenagers themselves. We've always been skeptical of the language around 'community engagement' – not because we don't want to engage with communities, but because it does not go far enough. In the fast-art world, 'community engagement' is often a 'strand' that's tacked on after the 'real art' is made. We've been asking ourselves how we can invert that process to involve teenagers in the making of the piece.

The result is a series of conversations with teenagers around Scotland which will be made into The Slow Dance, a podcast associated with our live show, the Untitled Discotheque Project. In this podcast, teens talk to other teens about sex and relationships. We expect these conversations to be tricky, sometimes uncomfortable, open to dispute. But we hope also fun, surprising, and revealing. We noticed that at the height of lockdown, when the weather was kinder, our local park was absolutely buzzing with teenagers. Flirting, singing, crowded onto little picnic tables, swimming, barbecuing, bonfiring throughout the night. OK, it was a social distancing nightmare. But it was also a real testament to the primal need of teens to be together, to their appetite for touch. Walking through that park, we dreamed up The Slow Dance as a way to capture how teens feel about intimacy today. We suspect that, as they return to school, teenagers will have even more to talk about when it comes to rules, romance, and social networks.

We're currently in the process of setting up conversations with teens. Some of these teens are affiliated with schools we've previously worked with and with our tremendous and tireless partners, including Platform in Easterhouse, the Beacon Arts Centre in Greenock, and Aberdeen Performing Arts. But we're very keen to set up conversations with teenagers all around Scotland, and further afield. If you are a teenager and you are interested – or if you know a potentially interested teen – you can read more here and get in touch with us at info@shotput.org. We'd love to hear from you.

This kind of 'engagement' – seeded at the beginning and running through the process of making a 'show' – is where we are interested in going as a company. Please excuse the annoying inverted commas in the previous sentence. They're there because we're questioning those words. Isn't engagement just broadening the definition of the ensemble from one that includes dancers and actors and designers to one that includes the audience? And isn't the 'show' now not just the hour and a half we spend in the dark, but the interviews and the thoughts of the people that listen to them? Our podcast might be small and imperfect, a work-in-progress inside of a work-in-progress. We know that other people already do this work very well, that we've got a lot to learn. We'd love to talk to any artists who have succeeded at, struggled with, embraced or shaken off this kind of work. We'll let you know how it goes.