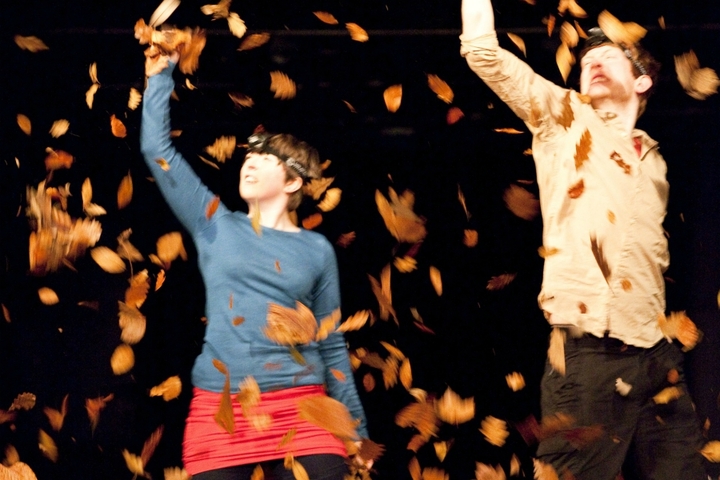 I don’t think it’s exaggerating to say – although it sounds like it – that aside from the youth theatre I joined at age 7 and the drama school I studied at, Imaginate is the organisation that has had the single greatest impact on my burgeoning career as a theatre maker. I’m currently halfway through a BBC Performing Arts Fund theatre fellowship with Imaginate, and this has already had an enormous impact on my career – not in the least in helping me secure a successful funding application to Creative Scotland to develop new work.

I first came into contact directly with Imaginate in my 3rd year of study at the Royal Conservatoire of Scotland, when I attended the 2012 festival on one of their assisted delegate packages. It was the chance to not just see a wide selection of the work at the festival for a fraction of the ticket prices, but also to be at the festival as a delegate and go to the networking events, and this was a brilliant way to begin making connections in the sector.

From this first point of contact, Imaginate were always incredibly welcoming to those of us studying at RCS who were interested in making work for young audiences and were proactive in enabling us to engage in masterclasses, festival visits, and events. That there were two productions aimed specifically at young audiences at Into the New, the graduate showcase for our course (something previously unheard of) is largely down to the encouragement and support we were given by Fiona Ferguson and the team at Imaginate. My own production, The Expedition, was supported by Imaginate later that year to be developed in connection with celebrated theatre company Fish & Game, and the result was a continuing collaboration with director Eilidh MacAskill.

Since that first festival visit, it feels like a lot of the significant moments in the development of my artistic practice have been connected to Imaginate. A free place on a three-day masterclass with Belgian company Kabinet K, for instance, has had a lasting influence on how I work with young people and provided new tools for creating performance with them

I was also awarded money from Imaginate’s Go and See fund to visit the Unicorn theatre in London for their industry showcase. As well as being able to get a sense of the work being made south of the border, the discussions at the showcase gave me a valuable insight into the shape of the industry in England, and highlighted how lucky Scotland is to have an organisation like Imaginate that provides opportunities for the sector to stay connected and progressive.

Being a resident artist with Imaginate has also enabled me to see a vast amount of performance that I would otherwise not have been able to – in Denmark and the Netherlands as well as at the festival in Edinburgh. Later this year I will also visit Belgium to see more work that is not likely to tour to the UK. The work that Imaginate both brings to UK audiences and takes artists to see is so diverse, and so often has a significant impact on the people who see it that it’s hard to imagine the Scottish theatre world without those influences. I know my own work has been massively influenced by what I’ve seen in the last few years, particularly in a recent trip to Tweetakt festival in Utrecht.

I’ve been extremely fortunate to be involved with Imaginate in such a way so early in my career, and it’s difficult to figure out how much these opportunities will continue to impact my development. I feel confident going forward from the fellowship knowing that there is such a supportive and proactive organisation at the heart of theatre for young audiences in Scotland.