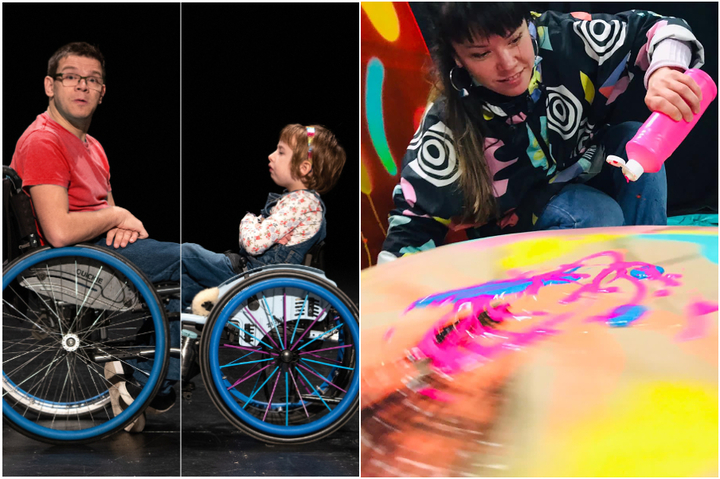 With less than a month to go before the launch of the Edinburgh International Children’s Festival on 21 April, two productions from the many times re-drafted programme have been announced. Both are brand new commissions by exciting companies and artists based in Scotland, and are supported by the Scottish Government Festivals Expo Fund.

Drawing on stories and experiences of disabled children and adults, Birds of Paradise Theatre Company (BOP) will explore what it means to be disabled and how we all feel about our identities, with characteristic humour, heart and honesty. Created by BOP and directed by Joe Douglas, written and performed by artistic director Robert Softley Gale, co-starring and with original songs by Sally Clay, and introducing Oona Dooks and Oliver Martindale, The Super Special Disability Roadshow exemplifies the company’s vision of a culture where disabled artists are recognised for the excellence of their work and celebrated for the stories they bring to the stage.

This interactive performance explores the mixed-up feelings and emotions that young children might experience in turbulent times. Using painting, music, and dance Katy Wilson and her team of multi-artform artists have created a unique experience for schools to experience online and outdoors. The show is co-produced by Starcatchers, Scotland's arts and early years organisation.

Festival Director Noel Jordan said: “We are delighted to be commissioning two new works by such interesting artists this year. Both teams have had to adapt to the changing circumstances and create a fully digital version of their show, but both have ambitions to develop the work for a live audience in the future.

Birds of Paradise are creating a performance that was initially planned for our 2020 Festival – as a result it has had the benefit of increased consultation time and the involvement of two young collaborators who will be represented through multi-media in the final performance.

Katy Wilson’s new piece, selected from a call-out to artists in Scotland, is very pertinent to our times, exploring how children make sense of complex emotions. Whilst originally planned to be perform live in school playgrounds, Katy and her creative team have responded to the current challenges with innovative use of pre-recorded film and workshop activities led by teachers.”

Birds of Paradise Artistic Director Robert Softley Gale said: "Birds of Paradise were delighted to be commissioned by Imaginate to take our approach of adult theatre to younger audiences.  Working with young people in making this show has been incredible fun. We like being honest and so do they! We are excited to bring conversations about disability into schools because we’ve been doing it far too long for adults and the world isn’t changing fast enough! Maybe the future will be accessible? We think we have made something that will make everyone laugh and think – and leave with a better understanding of disability."

Starcatchers Chief Executive, Rhona Matheson said: “We are delighted to work with Imaginate on co-commission, Mixed Up by artist Katy Wilson. Starcatchers and Imaginate have a history of working together to ensure the very youngest children across Scotland can access arts and creativity. Mixed Up the film means younger audiences still have the chance to experience this vibrant and exciting production in an interactive way.”

Artist Katy Wilson said: “Mixed Up is the mixture of two ideas I was beginning to develop with Starcatchers. One was called Mix Up – and was an idea with spinning paint and hip-hop dancers and a DJ. And the other was about grief and darker emotions that young children experience. This arose after the death of my dad who was the best friend of my 3 year old son, Rudy. Rudy was at an age where he was open to talk and would ask questions at nursery and swerve any topic to be about death – ‘how do you draw dead?’ he said to his teacher. But adults and my older child were less comfortable. I found there were few quality resources a three-year-old with no particular religion could relate to.

When lockdown started, we all started to grieve our old comforts and be separated from someone or something. I realised that Mix Up could be ‘mixed up’ and take a look at our emotions using dance and paint rather than words. It doesn’t have to be dark, just honest. I want to make something that children can apply their own meaning to. Having to make the decision to film something instead of performing a live, outdoors playground performance due to Covid has been really tricky, and this interactive film is just the start of something. I hope to keep exploring live experiences that help children to express themselves and understand their emotions.”

The full programme for the Edinburgh International Children’s Festival will be released on 21 April.