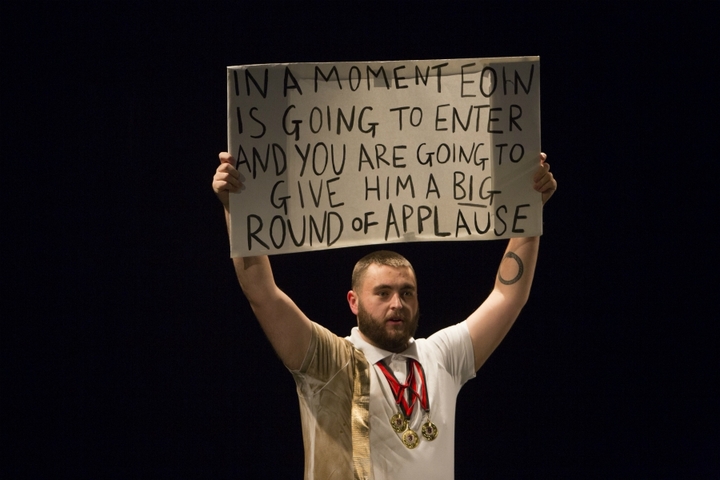 When you’re just out of uni, or transitioning to being an artist from another career, it’s a really fragile moment. Having financial backing from an organisation can be pivotal.

Eoin Mc Kenzie graduated in 2018, and was one of Imaginate’s first Launchpad artists. Here, he reflects on the impact of Launchpad on his career to date.

‘I applied to Launchpad when I was in my final year of uni. I felt like I was staring into the unknown after graduation, and there was something nice about the idea of sustained support from an organisation, for a full year.

It felt really validating to be selected as a Launchpad artist. I have seen a lot of peers finding it hard to claim being an artist, or to have the confidence to go for things that they want to go for. I think it’s been easier for me to do that as a result of Launchpad. It’s validating to have an organisation give you some money, space and support, and say: ‘We picked you’. It wipes away some of your self-doubt, which can be crippling, especially that early on.

It was great not to have a set-in-stone expectation of what Launchpad needed to be. I cringe now when I think of the Scratch performance that I presented in those first few months. But that show has now sat with me, and changed, and now I feel much more strongly about what’s it going to be. I was allowed to fail, and learn.

Going to Tweetakt Festival in Utrecht as part of Launchpad, was a massive moment for me. When I was studying, Flemish and Dutch companies like kabinet k were my biggest inspirations, but I’d never actually seen their work live. Tweetakt was amazing, because I was able to see so much of their work that doesn’t really get programmed much in Scotland. I find the quality of work for young people in Scotland to be quite safe, sweet and nice – stylistically, it’s not to my taste. Going to Tweetakt exposed me to the kind of experimental, risk-taking work that I want to be making, and to contexts where that work can be made for young audiences.

When you’re applying for work, it’s really nice to be able to say that you’ve been selected as a Launchpad Artist. It’s helped me feel more self-assured in what I want to do. Without Launchpad, I don’t think I’d have applied to make a show for young audiences with Lyra because I wouldn’t have seen myself as having enough credibility to do it. (Eoin has received a 10K commission to make a new production with Lyra Arts). I’ve also had other opportunities with Imaginate as well, like being selected for the PUSH+ Failure Lab and being asked to be an Artist in Residence for Immerse. It’s great that the organisation continues to invest in me. They don’t want to just push me out the door at the end of the project!

I’m now a year and a bit out of graduation, and I feel more sure of what I want to do. I feel more able to approach organisations like Creative Scotland, to have a conversation about how they can support me. There’s no way that I would have done that before.

When you’re just coming out of uni, or transitioning to being an artist from another career, it’s a really fragile moment. Having financial backing from an organisation can be pivotal. I sometimes wonder where I would be now if I hadn’t had something like Launchpad.’

Since this interview, Eoin has been selected for a PUSH+ international residency, to develop his performance idea for young men further.