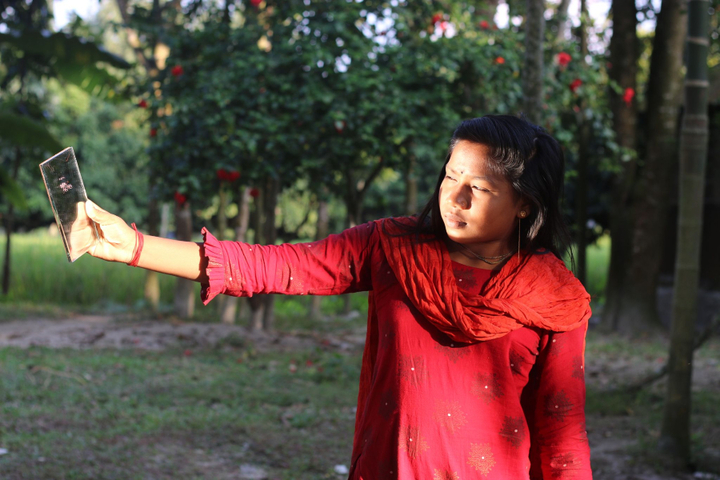 It's hugely exciting to be at the beginning stages of 'In A New Light'. I am particularly interested in how this international collaboration will shape the work, influence my practice and impact the young people. My experience of reimagining my practice over the last few months of lockdown has allowed me to see the possibilities in working remotely and this project feels like a really exciting experiment of that new way of working. The idea for the project came from my desire to make dynamic and emotive work that responds to our ecological crisis, whilst I was also questioning the pressure put on young people to change the future. The work holds those complexities, echoing the continuous shifts between 'we must do something!' and 'I can't change things on my own' - attempting to understand the times that we live in. The international collaboration with partners and young people in Singapore and Bangladesh is at the heart of the project, where our collective explorations and discoveries will shape the final outcome.

In A New Light is an international online performance project, a collaboration between artists and children in Scotland, Bangladesh and Singapore who face barriers accessing the arts. Young people from each country worked together with a team of artists to explore the collective voice of children and young people in relation to the current ecological crisis. Young people from St Ninian's R.C. Primary School (Edinburgh, Scotland), Beyond Social Services (Singapore) and Gidree Bawlee Foundation of Arts (Balia, Bangladesh) will take part.

Three experienced artists – Gudrun Soley Sigurdardottir, Kamruzzaman Shadhin, and Renee Chua have delivered the project whilst also responding to the young people’s ideas and the process itself.

Connecting children and artists across borders was key to this project; celebrating diverse stories, cultures and experiences through contemporary performance. The groups met online between September to May 2021 and engaged in a variety of tasks that encouraged creativity, reflection and collaboration. This project culiminated in the creation of a performance film using original text, movement and song, with young people and artists working collaboratively across the three countries.

This cross-cultural collaboration culminates in a short film; capturing original movement, text, song and reflections from the young people and artists working collaboratively across the three countries. The film captures the creative process which was both reflective and responsive, allowing for collective and individual responses to the themes of the project. The young people's thoughts, ideas and experiences are at the core of this project and their performance will centre around their emotional connection to the ecological crisis rather than a didactic presentation.

Watch the In A New Light film here:

This film has been made Gudrun Soley Sigurdardottir (Lead Artist - Scotland and Film Director), Renee Chua (Lead Artist – Singapore) and Kamruzzaman Shadhin (Bangladesh), with filming by Conor Reilly (Scotland), Wan Man and Ler Jiyuan (Singapore) and Salma Jamal Moushum (Bangladesh). The film was edited by Conor Reilly (Scotland) and Sound Design is by Gudrun Soley Sigurdardottir (Scotland). The text is written by children in all three countries.

In A New Light is a partnership between The Artground (Singapore), Gidree Bawlee Foundation of Arts (Bangladesh) and Imaginate (Scotland).  The project has been developed as part of the Singapore International Foundation’s Arts for Good Projects.

If you would like to know more about this project, please contact Imaginate's Schools Project Manager, Kirsty Robertson.

Blog: A reflection on starting In a New Light project