Touring as part of Theatre in Schools Scotland 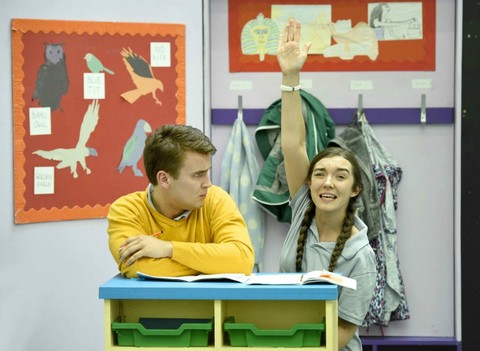 Up to Speed by Rosalind Sydney. Photo by Colin Hattersley.

Interested in touring your production as part of Theatre in Schools Scotland?

These productions are remounts of theatre or dance productions with proven record of success with schools audiences from Scottish companies.

The current model is for the company to perform 5 days per week for around 8 weeks, to 1 school per day, performing 2 shows per day – other models may be considered.

Productions should be suitable for nursery, primary or early secondary age groups.

Commissioned productions receive a fee to remount and tour the production which is then booked and managed by Theatre in Schools Scotland.

We are very keen to work with as varied a group of artists as possible, including people with disability, people of colour and from minority ethnic communities, and all those who feel their voices and stories are not commonly represented.

We are currently particularly interested in those suitable for Primary 2-5 (age 6-9).

Any company who is developing work for nurseries and schools, or wishing to highlight a production that could be considered for future should email tiss@imaginate.org.uk for outline information. This can be done at any time throughout the year.

More information on Theatre in Schools Scotland can be found at www.theatreinschoolsscotland.co.uk  or by contacting tiss@imaginate.org.uk