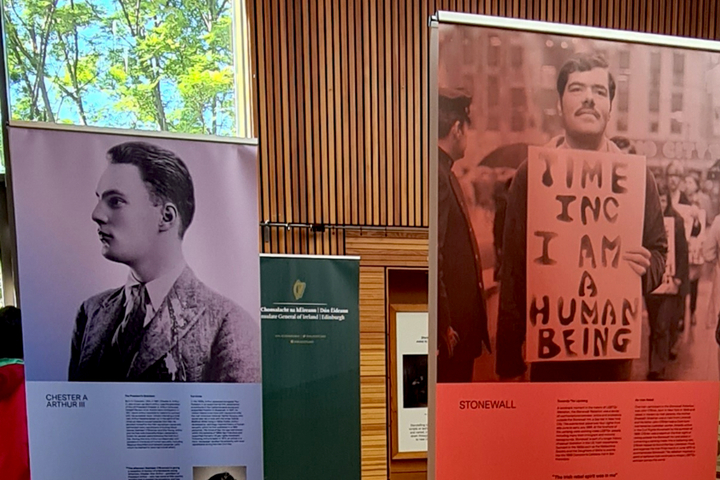 As part of Pride month celebrations members of the Imaginate team recently attended an event hosted by The Consulate General of Ireland’s celebrating Ireland’s LGBTQI+ Diaspora. The event featured the acclaimed documentary ‘Edward Carson and the Fall of Oscar Wilde’ followed by a panel discussion with the filmmakers, the Hole in the Wall Gang, and Merlin Holland (by the wonders of Zoom), hosted by Nick Sheridan, BBC journalist and author. The main voice or narrator of the film was Merlin Holland, the only grandchild of Oscar Wilde and Wilde authority in his own right. It was fascinating to learn the details of the court clash at the Old Bailey in 1895 between his grandfather, Oscar Wilde, and Edward Carson. It was the outcome of this case that led to Wilde facing charges of sodomy and gross indecency and eventual imprisonment and a life of poverty and exile.

The themes of this well told film were then further explored in ‘Out in the World’, the Irish diaspora LGBTQI+ exhibition. The exhibit documents a collection of 12 stories of Irish LGBTQI+ people who have ‘emigrated and found opportunities to live and love abroad.’ A fascinating afternoon sharing life stories and journeys and a reminder of the prejudice that has been and continues to face many members of the LGBTQI+ community across the world.