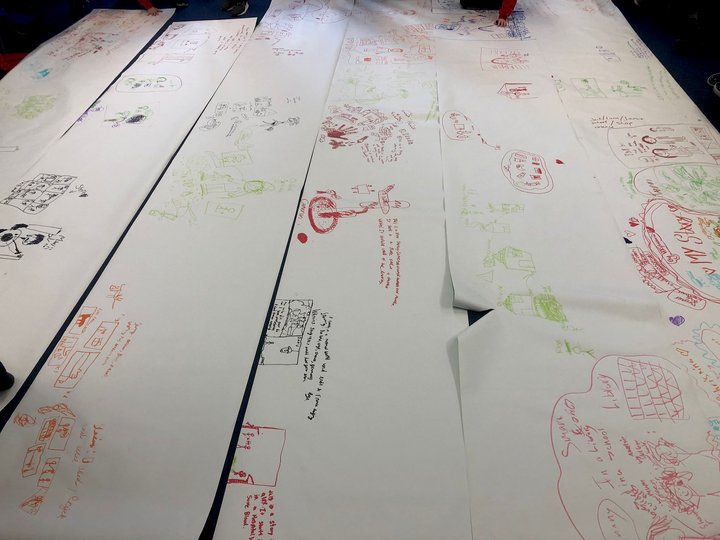 We're at a really interesting turning point in the residency at Forthview. I've found it's this turn that often becomes the heartbeat of a project – any project, with young people or professionals; dance, play or opera; scripted or devised. It's the turn from what you planned to what's come up. The turn from inspiration to voice. This turn requires us to be both sensitive and reckless, skeptical and trusting.

Going into this residency, I was interested in the young people's relationship to stories. I'd worked on a few projects that took a classic story and got the young ensemble's take on them. This can be charming, as young people realise that Romeo and Juliet weren't that much older than themselves. It can be subversive, like when 70 kids played the devil and ripped an opera singer to shreds. But I couldn't help feeling that in staging an existing story, the young people were always at the service of someone else. Usually someone who was male and white and dead.

So in week 1, I introduced the P7s of Forthview to 'The Juniper Tree' with caution. Here was another old story. But it's such colossal, messy fun. It touches on so many big feelings of jealousy, forgiveness, transformation, return. And there's decapitation and cannibalism along the way. The P7s ate it up. The intention was to swiftly stage this tale in physical tableaux that tackled these larger-than-life events. That done, we'd start connecting the tale to analogous stories in the young people's own lives and create some kind of autobiographical dance.

That was the intention. But for a variety of reasons, a couple of weeks ago, we chose to change tack. A list of some of those reasons:

1.    the kids have now really fallen in love with the story, or at least with the idea of storytelling.

2.    it's hard to get stories out of 11-year-olds, and for those stories to live physically. I bet some people are brilliant at it. I am not. But it's been really wonderful to tease out these personal stories through drawing and short bits of text.

3.    the two classes we're working with are very different. Very. One class works brilliantly as an ensemble. The other works brilliantly in smaller groups or as individuals. The ensemble-oriented group can whip up a team dance with enthusiasm and athleticism. The other group has a hilarious and wry take on the world, revelling in the gross, the disjointed, the loud. It feels only right to work with both of these skills, whereas the initial concept would have favoured the ensemble/physical-oriented group.

So here we are, again, at the turn. I love this place. If I were being purely selfish, I think I could just stop right here, at this turn. Looking at where we came from. And at the many roads we could go down. I wish I could. Stop.. Right... Here....

But we've got to go somewhere.