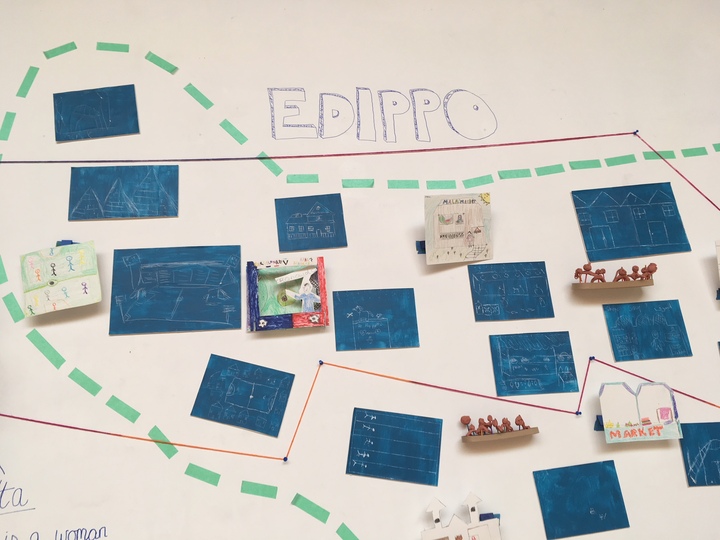 Our My City project has reached its conclusion. The exhibition has been displayed at Scottish Storytelling Centre and we’re feeling pleased as punch with the work created by the group. Now seems like a good time for some reflection, so here are a collection of things I’ve been thinking about.

I find myself increasingly using visual art in workshops I lead and projects I run. Whenever I participate in workshops myself I realise how terrifying and exposing it can feel to stand up in front of other people and perform an idea you’ve had 20 minutes to work on. (For the record, I also think it can be liberating, confidence-boosting, fun, empowering and joyful.) What I like about visual art is that, for a lot of people, it can feel safer. You have control over this object in front of you – be it a piece of paper, plaster, cardboard, fabric – you can work on your own, in a focused way, at a pace that suits you, you don’t have to say anything out loud. Working visually often enables people to articulate their thoughts and emotions in a clearer way than if they’d been asked to talk. I love that. And (as a person who loves words and talking) I’m hoping it can push me to make better art myself. At this point I would like to doff my hat to the visual geniuses of Yvonne Buskie and Arran Howie from whom I learnt a lot on this project.

I consider myself extremely lucky to have worked with so many amazing people from refugee backgrounds. The people I’ve worked with in this context are some of the most generous, thoughtful, determined people I’ve ever met. The majority of them have witnessed and experienced truly horrific things, their lives have been turned upside down, they’ve lost their homes, family members, everything that is familiar to them, they’re having to completely rebuild their lives… they’re amazing! I think they should have the highest status in our society!

The young people we worked with on My City had very few memories of their countries of origin. They’d left when they were very young, had lived temporarily in neighbouring countries before coming to Scotland. What was lovely about this project is that it gave them the opportunity to revel in the cultures of their countries of origin, to talk about these countries, as well as celebrating their emerging identities as Scots. When I asked one of the girls introducing the exhibition at our special event if she’d prefer to introduce it in Arabic she looked at me aghast, “No. I’m doing it in English.” Of course! She’s learnt a completely new language in a matter of months – why wouldn’t she want to show that off!

I just feel really glad to share a land mass with these people.

The My City project came off the back of my Imaginate  At National Theatre of Scotland Writer’s Attachment where I was exploring the story of the Cat Man of Aleppo – a man who has stayed in Aleppo, Syria, throughout the conflict to look after the city’s cats. I was hoping that some of the work we did on My City would feed into my Cat Man script. A few workshops in I scrapped that idea. I had to follow the group and their interests so they would clearly get something out of the workshops rather than following my own agenda. I decided to let this project be what they wanted it to be and to do some separate Cat Man research afterwards.

However, as we’ve reached the conclusion of the project and I’ve had space and time to reflect, ideas have started popping into my head inspired by the group. I know I have to make Cat Man a bit more fantastical, I have to scrap a lot of the words and play more with the visuals, I like the group’s idea of a king who is scared of his people so maybe the dog in Cat Man can be the king (why is there a dog in Cat Man I hear you cry – you’ll have to wait and see). I have a clearer idea of who I’m making this piece for and want to include details that specific young people involved in My City would find amusing. Next step is to get in a room and play some more with the story… looking forward to seeing what happens!