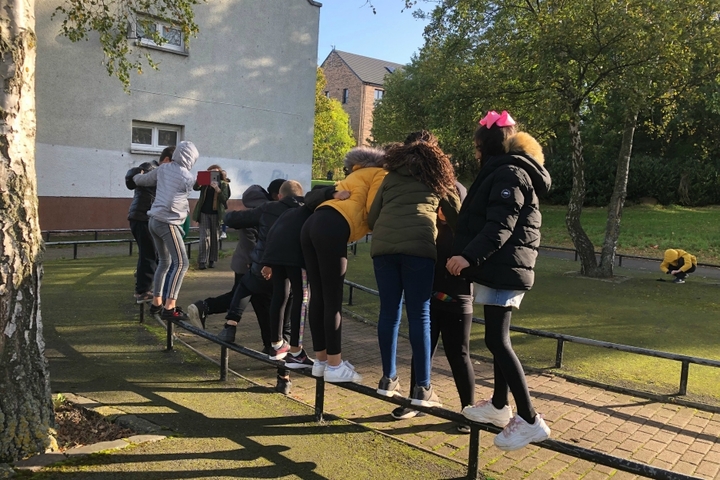 I asked the class what abstract means? - 'It's when you throw a bucket of paint over something and call it Art' - Lily, Canal View PS

We created some choreography inspired by the canal and walking on the edge. We learnt the first part of the dance in silence. This was inspired by the use of call and response in the song and how Caitlin uses music to communicate with the group. I wanted to try not using my voice to explain but only my body. I moved and the class copied and responded. This worked really well. Especially as both classes are very chatty, to have a moment in the session were there it is quiet and focus is very powerful. We then choose different actions that could be added into the dance and everyone decided their own order. The solo that was the same to start with transformed into something unique to each person.

This week I was so impressed by the bravery and confidence of some of the P6s. Particularly by the children who previously might have struggled to join in, but who now are offering to demonstrate in front of the whole class. Mrs Stewart a PSW who is often in the sessions with us mentioned she could see a big change in some of the children and that even in the playground they are more confident and moving their bodies and dancing during break.

This week the focus was learning the structure of the song and being to develop performance techniques. We want the P6s to feel confident and strong in their performance next week. We played a few different games to work on eye contact and group communication. Next week we are going to bring the two classes together for the first time to practice singing in a 61 strong choir. The P6’s have created artwork for the invitation for the celebration next week which will be displayed. There will be a performance for the whole school in the morning and a performance for families and carers in the afternoon. We will also be screening the short film of the process, I personally am really excited to see the reaction of the P6’s when they see themselves on the big screen!

Our final week at Canal View was great, on Tuesday we did our last rehearsals and preparation for the performance, the two P6 classes coming together of the first time to sing their song. On our final day we did two performances, one for the whole school in the morning and one for families and carers in the afternoon. It was great to have a chance to perform their original song twice and also share the short film which was projected onto the wall. We had popcorn for the P6s after the performance and teas and coffees for the adults who came to watch and it really did feel like a celebration of all the hard work and commitment the children have put into the project. I couldn’t be prouder of them. Here is the short film of the performance day filmed by Joel Venet.