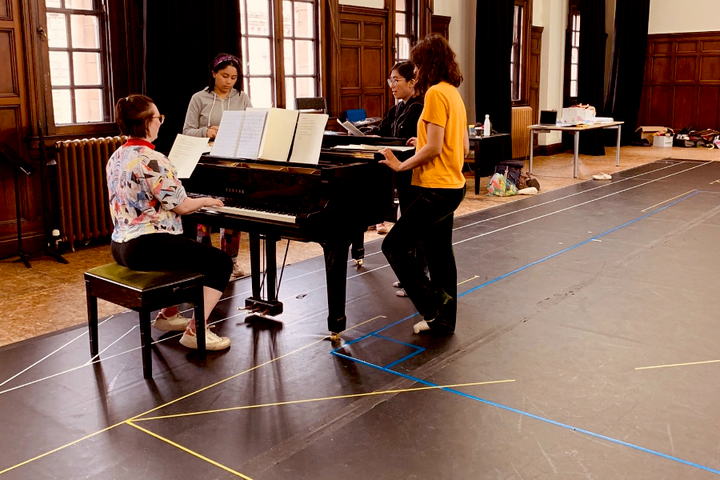 There has been something quietly liberating in realising my Jerwood Fellowship was going to be nothing like I had imagined it would play out. When I became a Fellow in early 2020, I definitely pictured a lot of time out and about - shadowing different companies / artists, meetings with my mentors, going into schools to deliver workshops, travelling abroad for international festivals, being in a rehearsal room.. And actually most of these things have ended up happening, but just at a very different pace, and in a very different timescale (and with different restrictions). It really has been a lesson in letting go, and realising I can’t control or create the situation I imagined. I just have to work with what there is. Which has, for the most part, been a lot of time on my own in my flat.

I had a big burst of energy last autumn, where I composed a lot of new bits and pieces, musical sketches and songs, which were part of a new practice for me. I think being alone, with no-one to show stuff to, gave me permission to explore a new route of experimentation. All of the stuff I made was inspired or instigated in some way by the reading I had been doing, by the chats I had been having on zoom with mentors / other artists, and through watching a lot of talks and shows digitally. All with the overarching question of: How can we make thoughtful and exhilarating sensory theatre for disabled children?

I did painting and drawing, I created visual scores, I mucked around with a loop pedal, and made soundcapes by layering my voice… all things that I would have felt too much pressure to do before, for fear of wasting time, money and a valuable opportunity. But there was something about being on my own that led me to experiment purely for the sake of experimentation, just to try stuff and see what worked.

By the end of last year, I had a lot of material that I was happy with, and, buoyed by the thought of having a goal, or a final destination point, I actually started piecing together an entire show… The order of songs; the textures and colours; what the costumes might look like; what smells there would be; who I wanted to work with; a beginning, a middle and an end. My Jerwood Fellowship was almost over, but I was ready to pitch this show to whoever would take it.

It wasn’t until I had my final chat with my Fellowship mentor Ellie Griffiths (Artistic Director of Oily Cart), that I realised I had got a little too comfortable holed up in my flat, experimenting with no audience. Ellie is a fantastic mentor because she is kind and generous – she really listens to your ideas and tries to get into the mind of the artist as well as the intended audience. But she is also very honest, and manages to always find a short cut to the heart of any creative endeavour. In this case: How can the show be finished? How can you make a sensory show with one person in a room on their own?

And she was right, of course. There is something quite scary about taking your time with a project, especially if you are really excited by it. I get worried that if I take too long, the excitement will fade. I worry that people’s hunger for the project will wane, or that someone else will come along and do the exact same idea, better or more successfully than me in the meantime. Or even worse - not as well, but it will look like I’ve copied them anyway. Or that funding will dry up, or that I’ll fall off the radar and this amazing opportunity – the wave I’ve been riding for almost two years – will crash into the shore and suddenly be over.

It is really hard to rip up a structure that was once so firm in your head. To allow yourself to unpick the stitches, and scramble it up. Reset the deck.

In May this year, I finally manged to get into a room for a few days with 3 amazing singers / performers / theatre makers. Working with Shiori Usui (Imaginate Accelerator artist), Ruby Hirsch (Imaginate Launchpad artist) and Danielle Jam was really the tonic I needed. I guess, when you reset the deck, you aren’t really losing everything – you still have the material, the images, the ideas – you are just allowing yourself to let go and see things from a new angle. I have put aside most of the music I created, but there were two songs that felt important to me – a sea shanty and a choral piece called Duussskk (the working title for this project). Together we worked on and recorded these two ideas:

I cannot begin to describe how amazing it felt to hear different voices singing these songs, as opposed to my own voice over and over, layered upon itself. It reminded me of the reason I wanted to make this piece in the first place – to interrogate and investigate different timbres, different tones of voice. To really explore what our voices are capable of, and to play with all contrasting types of sounds – scratchy and pure and crunchy and sharp.

We also spent time doing some Viewpoints; we improvised; we played with the kinaesthetic nature of voices and bodies in space. I realised that it is vital that there is some element of “liveness” in Duussskk – that the performers are responding to the audience’s presence in some way. If that one audience member wasn’t here today, the show would be different.

We experimented with scale – the vastness of a room full of multiple voices in equal focus, and then the contrast when the lens zooms into a singular voice, or a singular viewpoint expressed through chorus. We created visual scores, and then performed these scores utilising all of the tools we had explored in Viewpoints (eg. tempo, duration, repetition, architecture, silence, pitch etc.)

Things are starting to firm up again a little for me now, but I am cautious at getting too sure. In a dream world, I would like to have a cast of 15 singers, but I also need to try out some of these ideas with my intended audience – or at least find out who our audience is. At the moment, I am thinking Duussskk is for Autistic young people aged 7 + who are sound-seekers. But I am open to being surprised.

As my time as a Jerwood Fellow ends, I have recently been offered a fantastic opportunity to be one of the lead artists with Mahogany Opera’s new project – making a sensory opera with and for young people with additional support needs. This is a year long program, working with pupils and teachers at Sandgate School in Kendal, and will culminate in a performance in July next year. I am particularly excited, because I know I am going to learn so much, and all of this will feed into and influence my work in ways I cannot even imagine.

Jerwood Fellowships are funded by Jerwood Arts, the leading independent funder dedicated to supporting UK artists, curators and producers to develop and thrive. They enable transformative opportunities for individuals across art forms, supporting imaginative awards, bursaries, fellowships, projects, programmes and commissions. They present new work and bring people from across the arts together through our exhibitions and events in London, as well as across the UK.