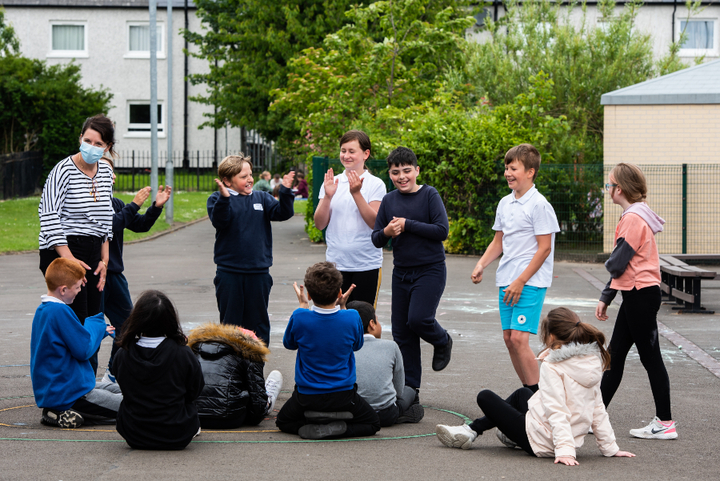 We arrive at Forthview Primary on Monday morning with a bag full of materials and heads full of protest. We’re here to work with P6A and P6B on themes of revolution, protest and counter-protest, and the ways in which we can make major and minor changes to our world. Marion and I are developing a new show, Danger DuVall: Space/Time Adventurer, a madcap multi-timeline experience relying on interaction with young audiences, and the P6s will be helping us to figure out how much agency their age group might welcome.

We start by imagining a better world. It feels like the only place we could start. The P6s tell us what changes they’d like to see – in their school, in their own lives, in the wider world. Their suggestions from abolishing Mondays and making all Minecraft mods free to improving animal rights, supporting LGBTQ people and ending racism. We're both surprised by the maturity of some of the ideas they come up with in terms of gender equality, social rights and abuse. They seem acutely aware of the importance of these difficult issues. They also come up with giving everyone between £1000 and £1million pounds per month and unsurprisingly, we unanimously agree with that.Collectively they write manifestos for the world they’d like to live in by the time they’re 30, and we challenge them to choose the issues they feel most strongly about and create a banner so they can announce their views loud and proud!

Of course, banners are just one way of making your views known, so we cast our net wider and start exploring chants and dances. How do you boil a complex topic down to a handy slogan? How does it feel to call out the first part of a phase and hear a whole group of people finish it off? What’s it like to use your body in a way that shows people your purpose is strong? It’s a big subject and a lot of food for thought.

When dissent arises within one of the groups, with some members supporting the chosen cause (recognising the importance of a particular YouTuber by making plane tickets to meet him available for free) while others oppose it, it becomes necessary to introduce the idea of counter-protest. How do you stand against ideas that you don’t agree with? How can you demonstrate your views when the other side might be bigger, stronger, louder than you? We look at sit-ins, non-violent obstructions and regrouping. This opens up a discussion about how scary it can be when you’re sitting peacefully expressing your views while all around you people march and chant, and we talk about how even small and quiet actions can sometimes require an awful lot of bravery – particularly when the people making you scared are your friends.

Our other main task is a quick and simple introduction to the concept of representative democracy. Each class get to elect two leaders. Those leaders will help me and Marion to carry out some of the games and exercises, and they can negotiate with us for changes their group would like to see in our sessions with them. Anyone can nominate themselves and tell everyone why they would be good at it, and once they’re elected they have to listen to what their classmates want and feed it back to us.

Perhaps unsurprisingly, both P6A and P6B negotiate for some extra playtime. The opening request is for 20 minutes, which Marion and I bargain down to five minute at the start of every session. The classes seem pleased that they asked for something and got it. One of the teachers mentions to us that the two leaders elected in his class have been taking the task very seriously and as soon as we had left had asked for extra time to consult with the class about the new ideas that they had to implement. While they asked for more jobs from their teacher, it seems that what they were craving above all was more responsibility in a society where they tend to be infantilised until they hit 18.

However, all is not necessarily rosy – as in any democracy, there are those who aren’t happy with the collective choice of leader, and the question of what you do when that’s the case comes up. The first suggestion is a fresh election, but when they’re reminded that the leader’s term lasts for the duration of the workshops, the group switches tactic and suggests political assassination! So we have a chat about the consequences of solving problems with violence and play a roleplaying game based on The Queen Wants a Cup of Coffee, exploring ideas of tyranny and overthrowing. Some groups went full French Revolution and opted for beheadings, finding that seizing power is less fun when you get beheaded in your turn. Others chose to arrest their badly-behaved monarchs and either insist on better behaviour in exchange for freedom, or replaced them with collectively-held power.

Unfortunately, the reigns of imaginary monarchs weren’t all that got cut short – on the second-last day of our residency we had to leave early due to possible covid cases within the school. This meant it wasn’t possible to do our planned wrap-up, in which the P6s would have created art installations around the playground sharing their slogans and manifesto points, inviting all who saw them to think about the same issues and how they themselves could be a force for change in their world. Instead we’re creating packs to be sent to the school and quarantined so the classes can finish their tasks in our absence (and possibly start a letter-writing campaign demanding that their year group be provided with their own personal megaphones!)

It's been an incredibly challenging yet rewarding experience for us to confront our ideas about young people and politics to their vision of their world. The friction it created between the adult and the young people world was definitely made of creative and ideological matter, provocative and inspiring, uncomfortable at times yet stimulating. We learnt a lot at their contact in terms of our own artistic practice but also about how we adults behave with younger generations. A lot to think about and to distill into our upcoming performance!